After sailing on Saturday, we packed 3 boats onto the trailer ready for Sunday’s excursion across the harbour bridge to Sailability Dobroyd for the President’s Cup.Photo of Our boats waiting to go,

Ralph, David W, David G, Denis, Michael, Eli were our team support for Alan and Philip, sailing solo in the 2.3’s. Oliver sailed with David G in Amor, Photo of Oliver figuring it all out,which we borrowed from Dobroyd, and Denis sailed with Steve in Dolly Wallis. Oliver had extra support from his Mum and Grandmum, while Philip garnered support from Lillian and Peter.Photo of Phil taking notice at the briefing,

Philip impressed everyone at the Regatta with his confidence and skills as he took off for the course in Alan Wood, and Alan was also very impressive in Clea. Both of these boats won their sections, while Amor got a 3rd and Steve and Denis in Dolly Wallis tried their hardest against a strong, well-trained opposition.

The race was held in 2 sections, placed around an early morning lull, followed by the first race, then a strong wind-storm, when all the boats were rested at the dock. We were lucky to get a second race in the afternoon before the skies closed in again and the wind came up.

As soon as the race was over, all boats were packed away and we went upstairs for the Presentation.

Photo of Steve with the Starter’s Award.The President’s Cup was taken by Phil, and is resting back in its home space at MYC, waiting for Philip’s family to pick it up.Photo of First prize 2.3 Singles winner, Alan B with Neil A 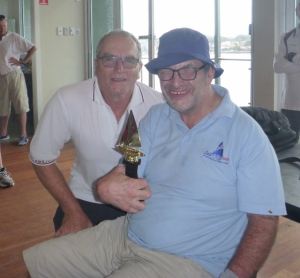 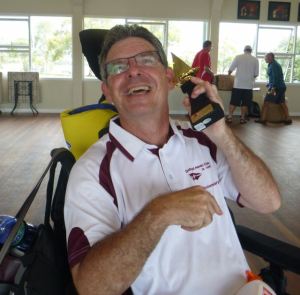 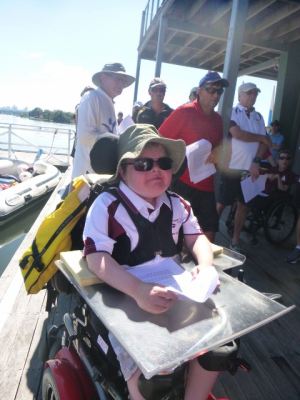 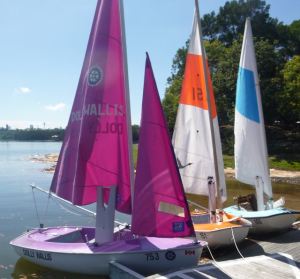