The clouds were rolling in, and the wind was a slight south easterly, making conditions at Manly perfect for our sailing with Dee Why Primary Support Class, our kids from country areas staying at the Royal Far West Scheme, our little group from Achieve, and the Freshwater High School students.

As usual on Wednesdays, the deck and pontoon at Manly Yacht Club were aswarm from early in the morning with helpers. Brian was Sailing Coordinator, Barry on the pontoon, Rob and Corey on Charlie’s Chariot. The rest of the team settled into their favourite jobs; Denis as Sailing Instructor, Caroline as spare driver on Charlie’s Chariot, Rowell lending a hand wherever it was needed, Michael and Marc being available as tall, strong people for lifting boats up and down, Peter as radio operator on Charlie’s Chariot, Tony being busy everywhere, John C on the pontoon and as a sailor, Philip and Helen doing registrations, John W also on Charlie’s Chariot, and sailors, David G, Ivan, Bob, John B, Jim, Lindsay, Steve on the water. We do make a great team.Photo of Kerry and Irene from Achieve

We also had a couple of community people there today, which was great to see. Thanks for coming down Oliver, Ted, Patrick, Alan, Philip and Gerard. It looked like an enjoyable experience and we hope to see more of you.

Lauryn, Michael, Braith, Jack, Paige and Gavin were with the Royal Far West group. First time on the water ever for some of these country students.

Robert, Tykaele, Angel, Sam, Talon, Sean, Lachlan, Samuel, James, Winston, Michael and Nathan from Dee Why Primary all had a sail, and most also experienced a ride in the Support Boat. Tykaele and Nathan are first on next time, as both missed out this time.

Kerry, Hannah, Cameron, John and Fowzia from Achieve enjoyed their sailing. In the meantime, Alan went out with Denis for a lengthy sailing skills lesson.

Photo of Gerard and John B in Eli DPhilip arrived to join the Freshwater High group, and chuffed off for a sail in Alan Wood.

Emily, Amelia, Eddie, Ben and Jordan came from Freshwater High. These students are creating a real bond with their sailor teachers, and all are achieving great things in the boats. Everyone today steered the boats around a course with huge smiles on their faces. Best of all was the putting away. Strong muscles were needed to drive the winch that pulls the keels out, then more stamina needed to drag the boats up the ramp and over to the hosing area. A great deal of skill is required to de-rig the boats successfully, wrap up the booms and put everything away neatly. We left the hosing skill until last, as this is the fun part. It was lovely to hear the squeals and laughter as we all got just wet enough to feel cool in the strong sun that had appeared by that time.

Remarkable today in the water were the swarms of blue-bottles dotting the surface of Manly Cove. In some places, it looked like an island of blue bottles had developed, almost deep enough to get out of the boats and walk on. Luckily, everyone with us understood the dangers of getting trailing hands stung. All hands remained well and truly inside the boats. 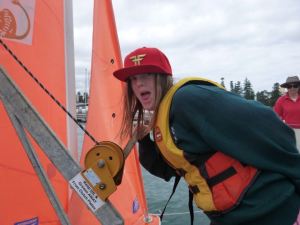 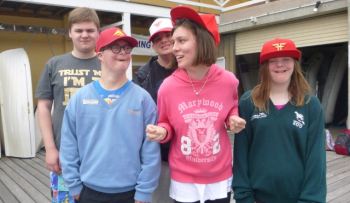 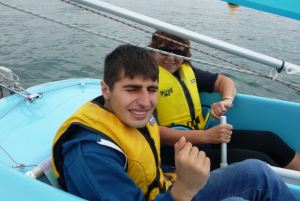 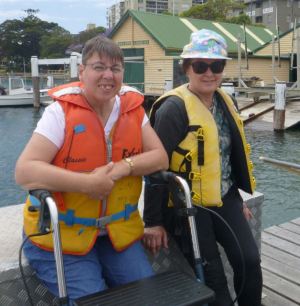