This morning’s weather was perfect for our activity, with lots of participants expected, just the right amount of breeze, and a lovely sunny day.

Early bird helpers: Kelly, Corey, Caroline, David, Bob, John, Barry and Marc, started putting boats out and rigging, so that when the main body of helpers arrived, most of the work was already done.Photo of Bronnie, Sharnie, Isabel, Jess, Thomas, Ben from Royal Far West

This was lucky this morning, as our participants started arriving at 9.15 and we were able to get Bronnie, Sharnie, Isabel, Jess, Thomas and Ben on the water with sailors Ivan, Caroline, Jim, Bob, Michael and Kelly. The helpers for this group were Claire and Anthony. John was the able Boat Operations Manager, Eli the Sailing Coordinator, David, a most efficient Pontoon Manager. Corey and Barry went off in Charlie’s Chariot, Marc, Colin and Brian helped on the pontoon, Kandy and Helen were registrars, Denis helped up on the deck, Kathy did her wonderful time-keeper job. Later on, Peter arrived to paint the mooring a beautiful bright red, and Lindsay to take over some of the sailing.

Jack, Russell, Zane, Jarryd, Ella, Matthew, and Harrison from Fisher Rd, with helpers Sue and Matt, took turns on Charlie’s Chariot and the sailing dinghies until everyone had had a go on both. We had a small mechanical problem on Charlie’s Chariot, so these people were returned to the pontoon, Robbie R was commandeered as a replacement Support Boat, the service department was called, but sailing continued as if nothing had happened.

Several of the sailing dinghies got up close and personal with a lone dolphin, which was playing around near the moored boats, and became interested in the coloured dinghies.

Photo of Tessa, getting ready to embarkJoe, Rebecca, Karyn, Tess, Ross and Glen arrived from Sunnyfield with Tom and Mike and Photo of Ross and Jim in INGall went for a lovely quiet sail. Following these were Gary, Peter, Yvette and Vicki from French’s Forest CAPS with helpers Zoe, Luke and Aimee.Photo of Gary being lowered into the boat

A visitor from the UK, Philip, with sister Allie had an extended sail, also chasing the dolphin, an experience to be remembered and reminisced about when he returns home in a few weeks.

Thanks you so much to all the helpers and participants, you made it a really good day for all of us. 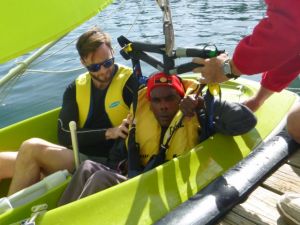 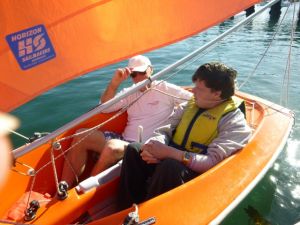 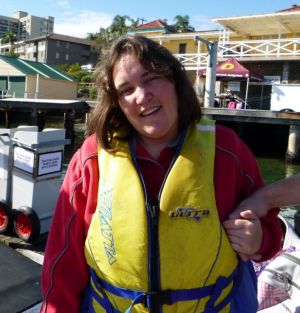 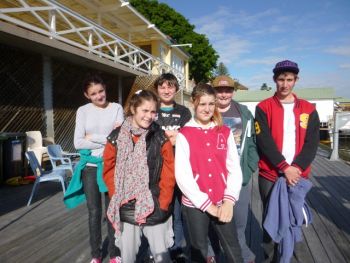