There was no decision to be made this morning, it was going to be a beautiful sailing morning with a light Nor Nor Easterly breeze, and lots of eager helpers coming along for the ride.

Early birds Helen, Terry, Ray, Barry, Brian, Michael and David Gr. arrived early to start the rigging and get Charlie’s Chariot to the pontoon. By the time Philip, Kathy, David Go, Corey, Samantha were on deck, most boats were in the water, enabling our crew out on the water for a practise sail before our participant sailors arrived.

Photo of Jake, waiting patiently for his turn,A short briefing on the efficient use of harnesses started the day, and then sailors Terry, Jim, Samantha, David Gr., Michael, Ivan, took off with some of our trainee sailors. It wasn’t long before Zane, Jake, Matthew, Harrison, Photo of Fisher Rd students: Zane, Harrison and MatthewJarryd, Russell and Thomas from Fisher Rd School arrived, and the serious business of the day commenced. David Go was a fabulous Pontoon Manager, keeping things moving safely and efficiently, Ray was in Charlies Chariot with Observer, Corey, Caroline was in charge of life-jackets, with helpers on deck Helen, Barry, Kathy, Michael, Sheila, John, and pontoon helpers Barry, David W, Peter, Byron, John C. The Fisher Rd children, Zane, Jake, Matthew, Harrison, Jarryd, Russell and Thomas all had an enjoyable sail before the next group arrived, with Russell and Thomas opting for a ride on Charlie’s Chariot along with their teacher, Trish. What a wonderful experience for these children, evoking a torrent of language.Photo of Ivan taking smiley Jarryd,

The following group was from House With No Steps, and we had a couple of changes of sailors at this stage. John C, John B and Caroline took over some of the sailing duties to give Mikey, Paul, David and Craig a sail, and Peter took over on the Support Boat. Mikey managed to have 2 bites of the cherry, as with that lovely smile, who can resist? It was also good to see that the teachers from Fisher Rd remembered these young men from former days. Thanks, helper, Gabby.

Photo of John B and Chris from Amaroo.This group was followed by our delightful group from Amaroo, under the management of Eluene, Tegan, Ben and Chris. Sarah, Madeline, Daisy, Chris, Elizabeth, An, Nicole, Ian and Claire also enjoyed their sail, and the picnic that followed. It has taken a few tries, but we now have Elizabeth comfortable in the boat, as evidenced by Photo of Elizabeth’s fabulous smileher beautiful smile, and the lovely was she communicates her pleasure. An kept us amused by his comments about all manner of things. Next time, Ashley will go for a sail or a ride in Charlie’s Chariot, when we have sorted out some safe seating for her.

Michael B went for a solo sail, and next time it will be Byron’s turn for this, so that we have 2 new trained sailors. It didn’t take long to pack everything away with such a willing group of helpers. All in all, a very enjoyable morning. 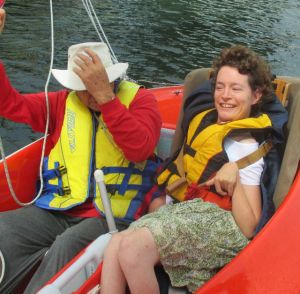 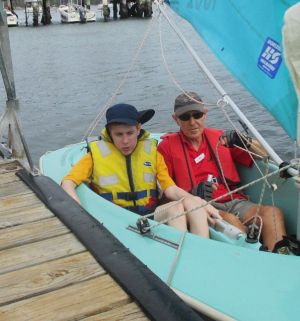 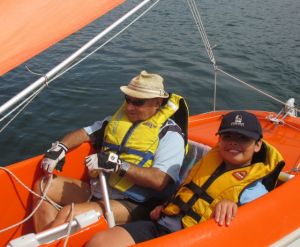 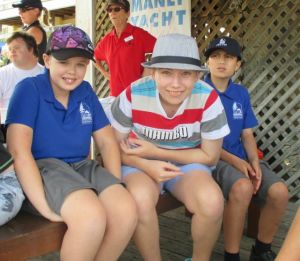 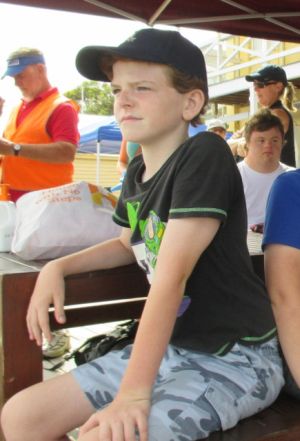