A magic date, and Marvel the Magnificent waved his magic wand to make it a magic day. The weather, the company, the surroundings, the volunteers, the task, all combined to make it a perfect sailing day.

Our superlative Sailing Coordinator, David, helped by Boat Operations Manager, John W; Registrar, Helen; life-jacket helpers Sheila and Joely; deck hands Denis, Caroline, John M; sailors, Denis, Ivan, Terry, Mike, Bob, John B, Ray, Adrian, Brian to start with, Tom and Rob on Charlie’s Chariot with Corey as observer got going with the faultless start. Down on the pontoon, we needed help from Colin, John C, Tony and Peter. Because of the rapid interchange of boats, every hand and every eye was needed to keep things safe and efficient.

Photo of Ivan and Jacob,Of course, we needed participants to make it all worthwhile, so we welcomed Royal Far West students: Jacob, Jess and Ben and then a trickle of Truscott St students: Jamie, Liam, Harry with their helpers or Mums. (More on these later.)Photo of Harry and Stacey,

Photo of Al sailing out.Alan arrived at this stage, so there was a short lull while we rigged Clea with a mismatched sail and he took off.

Our new volunteers for today may as well have been there forever. A huge welcome to Mike and Terry, who both just fitted in with the rest of the group and appeared to know by osmosis the right way of going about things, both taking their spots as sailors, when the original sailors became tired.Photo of Gabriel and Terry

The Truscott St trickle became a flood, as Harry, Gabriel, Sion, Ryan, Alec, Liam M, Sam, Tazmira, Mustafa, Zoe, Milla, Sophie, Max, Abby and Jin arrived, were fitted with life-jackets by the deck crew, now including Michael, Susan, Kandy. One by one, these children went for a sail, or a ride in Charlie’s Chariot. Some on a helper’s knee, Gabriel in the car-seat, some seated in the boat. Tazmina and Ryan plucked up every ounce of courage and went in Charlie’s Chariot. They came back with the most delighted smiles on their faces. Gabriel even got lifted up to drive Charlie’s Chariot with his helper, Scott, so it was a great day for him. Next time, Mustapha will try the car-seat, as we think he will be slightly more comfortable and secure. We really appreciate the helpers who come with these children; some staff, some volunteers, some family members. Thank you so much, Clare, with RFW, Corene, Katherine, Stacey, Lorena, Michi, Kerry, Scott, Frances and Chris with Truscott St.Photo of Jamison and Corene,

A video GIF of Brian taking young guest for a sail in Black Swan.Lynette came down for a special sail, and went off with Terry for a long sail and chat. The chocolates that were a gift from RFW were all devoured after we got everything away, so helpers all went home full of satisfaction, lots of best wishes for Christmas, and pleasant feelings for a job well done. 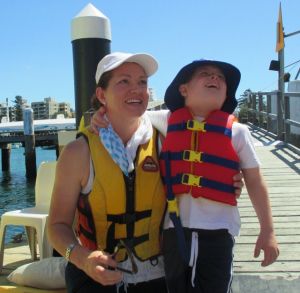 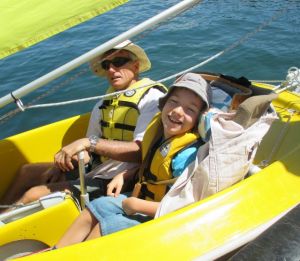 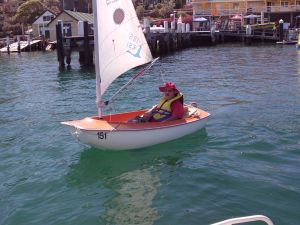 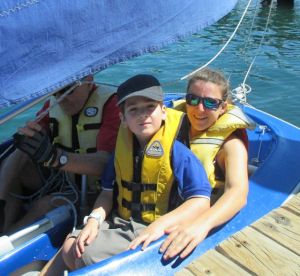 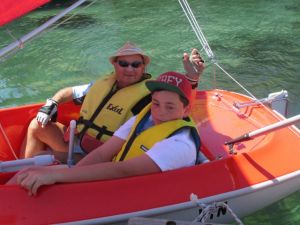