Photo of the unpacking of our boats

Owing to Barry’s wonderful organisation, with lots of help from Denis, Lianne and Chris, our 4 boats were lifted to Dobroyd Aquatic Centre early in the morning on 1st December to take part in our annual Day of Disability celebration and the President’s Cup.Photo of our group Ivan, Lianne, Chris and Al at the briefing

We all dressed in Pirate Garb to enter into the spirit of the occasion, decorated our boats, carried water pistols, and swords in our scabbards, and were determined to have fun as well as succeeding in the racing. We did all this along with groups from Penrith, Bateman’s Bay, Callala, Pittwater, Dobroyd. This brought the total to 31 boats, with all boats racing in their own class concurrently, so that 4 races were run in the perfect conditions. The results were kept and carefully collated. Manly came second in the 303 doubles (Luca and Lars), with Denis and an assortment of crew 7th and Barry and an assortment of crew 12th. In the 2.3’s Alan came 5th in the racing, but came away with The President’s Cup with his name being pulled out of a hat.

Photo of Lars and luca strutting their stuffThe President’s Cup was a novelty race, with ribbons being taken from the buoys by the first boats to get there, the boat with the largest number of ribbons being the winner. In fact we were all winners that day, because it’s the most fun regatta we have had in the last few years. A real throw-back to when we all had fun together, and a no-stress, no pressure day.

A animated gif of some of the boats in the fleet

Kellie Oriel from Cronulla won the prize for the best-dressed boat, which Manly would definitely have won.

David Webb arrived just as Alan went home, totally exhausted. He went off in Clea, and was soon joined by Hunter. Between them, they won the rest of the racing for the 2.3’s giving them a few trophies between them.Photo of Barry and Chris picking up their prize

A very quick pack up and get away was affected, so that we even had time to get the boats away in their beds at Manly Yacht Club before dark. Thanks, team: Barry, Chris, Lianne, Denis, Weibe, Brenda, Hunter, David, Ivan, Eli. 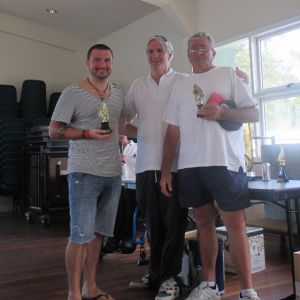 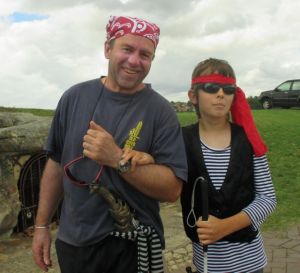 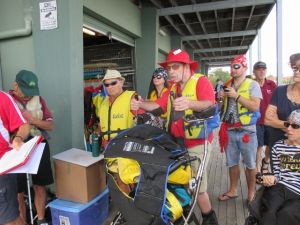 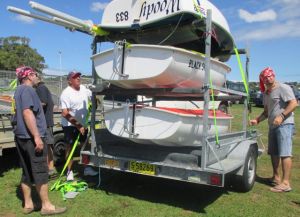