After a gloomy forecast, we decided to go ahead with sailing as the rain seemed to be holding off, and the wind was perfect.

Karen, Helen, Denis, Ray arrived early to put the boats out. We decided that 5 boats would be enough, as we have several volunteers who were not well enough to sail today, and we were not expecting a large number of participants. Two new volunteers arrived today, David and Colin, along with Kandy, David W, Pam, Tony, Caroline, Brian, Philip, and John.

Photo of Brian taking Phil for a sail

Our little group from Fisher Rd came early and was immediately swept into boats, along with their teacher, Caroline. Emma,Photo of Emma (pink hat) Teacher Kim, Harrison, Jake Jake, Harrison, Michael,Photo of a big smile from Michael with John. Adam and Hannah had a quiet sail, all behaving with perfect aplomb. While they were out on the water, our little friends from Verne Barnett played on the swings, or on the grass until it was their turn. Amelia, Thomas, David, Anthony and Finley came across as the Fisher Rd children returned, some to sail, and some to have a go on the Support Boat. These children were wrapt up in sailing, and could have gone for another few hours, but their friends also needed a turn. They were replaced by Naoto, Callum, Anthony, Ryan, Daniel and Alush. Ryan kept everyone in stitches with his astute observations, and Alush was not far behind.

As we got close to the end of the morning, Shirley, Alex, Stephen and Alun from Sunshine Pymble came down after a hard morning’s line-dancing. Shirley to rest on the seat, Alex to draw a picture of his car, Stephen and Alun for a sail. Thank you so much to their helper, Rachel, who was amazingly patient with her participants.

Our two new volunteers seem to be very good value, with Colin already an accomplished sailor, and David almost there, but also the holder of a Power Boat Licence. Both will be invaluable over the Winter months, when many of our usual volunteers are on their annual pilgrimages to Europe.

After putting all these boats away, the main body of helpers left, leaving a skeleton staff of Denis, David and Eli for Philip to do some filming in Alan Wood. Unfortunately, the rain came down about 5 minutes after Philip, his Mum, Lillian and the film crew from Cerebral Palsy Alliance arrived, so we had to pretend to go sailing while sitting in the warm, dry boat room. 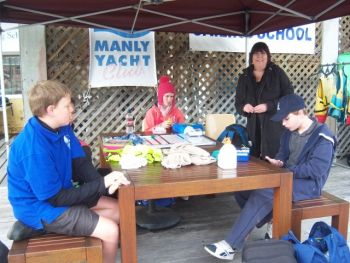 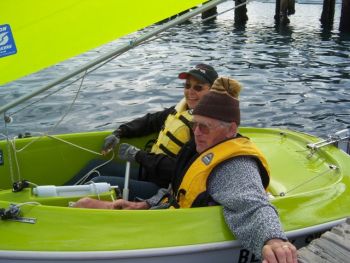