We started the morning with the christening ceremony of Black Swan, the 303 that had been donated to us by Cromer Golf club. Judy arrived at the club in plenty of time to give her a good polish, and she was definitely looking her best for the big occasion. The actual christening was carried out by Katrina, President of Cromer Golf Club, who said a few nice words over Black Swan to ensure she always carries her sailors safely.

Photo of Katrina, pouring Champaign over the bow of our new Access 3O3 Black Swan.

This was the last Saturday for general sailing for this season. We had some wonderful new helpers this morning, and it was lucky that we did, because the number of volunteers who were rostered for duty today was missing quite a few people, some due to illness, some due to holidays, and others were unexpected absences.

The very dedicated crew who were there: Support Boat Driver, Brian; observer, Helen, Pontoon Managers, David and Michael, Sailing Day Coordinator, Eli, Registrar and chef, Sue, and sailors; Denis, Ivan, Judy, Evelyn, Steve, David did a wonderful job, and the helpers in the different areas were fantastic!!!! Tony, Konrad, Philip, Jannie managed life-jackets, harnesses, hoisting, boat catching, safe retrieval of sailors, helping with the barbecue so that our participants could all have a wonderful time on the water, and feed the inner man when they returned.

Our new helpers, Nic and Niamh got straight into it, and helped wherever possible. Niamh became our time-keeper, a most important job today with so many people arriving, and Nic alternated between helping on the Support Boat, helping on deck, and then washing boats and packing up gear at the end of the day.

The people who benefited from today’s lovely weather and sailing team were Kerri, Anna, Ashley and Grant from Washington, with helper, Alex, Rob, Duncan and Jackie from Housing Connection, with helper Barbara, Lauren, Danny, Jess, Danice, Shane, Mark, Jordan, Bart, from Rap’n’Rave, and the last group, Brad, Robert, Stuart, May, Carlo and Steve from BIRDS, with helper Gaynor.

Apart from these groups, there were Luca, Vanessa, Kate, Jonathan, Denis and Philip our sailors who come privately. It was lovely to learn today that we have some extra expert sailors: Lars, Luca’s Dad, Jannie, who has been learning to sail and is now competent enough to take people out, and a helper, Will, from BIRDS, who will be able to take his own clients out when they come down next time. 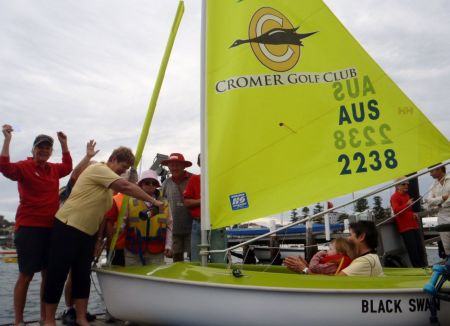