18 very eager sailors arrived this morning looking forward to the first sailing day of 2015. Our little group from Rap’n’Rave were there first very keen to get into boats which had been rigged earlier by our keen team of Barry, Denis, Peter, Juliette, Jackie and Caroline.

Lauren, Jordan and Mark were first onto the water, with Megan, Juliette and Alan going for an early sail. Cosette and Leith, visitor helpers from Orange did a fantastic job getting boats out, then down to the water. I don’t think they had time for a sail, as they were quickly whisked away by their parents for the rest of the day’s program.

Photo of Roger and Michael in 3o3, Dolly Wallis.Ashley, Anna, Judy and Kerri were the next to go, then the BIRDS started arriving. Roger, Brad, Stuart, Carlo, Dirk and Danielle were whisked away by the strengthening breeze, then Vanessa, Jonathon and Bart were taken for a very enjoyable sail. Matt arrived in full voice and Photo of Bart and Jackie 3O3, Woody.enjoyed his sail so much, that he decided to sit in the boat for a little while to stretch out the enjoyment. Eventually he realised it was time to go, so he hopped out with full speed.

Photo of Danial with Michael in 3O3, Dolly Wallis.Because of the lower numbers than usual, we were able to give everyone a little longer time on the water, which was very much appreciated.

Jackie was wonderful as the Sailing Coordinator, until her skills as a sailor were requested, when Helen took over this important role. Ralph and Caroline were drivers for Charlie’s Chariot, Megan was Registrar, Time Keeper and Radio Operator, a big job for one person to handle. Sailors today were John Connor, Denis, Jackie, Ivan, Peter and Michael. Tony was everywhere, helping in his inimitable style…on the deck, on the pontoon, on Charlie’s Chariot; a fabulous volunteer.Photo of Ivan and Jordan in 3O3, I.N.G.

Helping on the pontoon were Barnabas and Amir, with Jon Petrie helping up on deck after his sail, Helen and Juliette were the chefs.

Barry was feeling poorly, so he went home, so that we were fairly short handed for the putting away process. That is when extra helpers come in so handy, so Barnabas’s Mum and Uncle helped with this. Thank you so much to this family, who had driven all the way from Foster this morning. Without you, we would still have been there at 4.00 p.m. 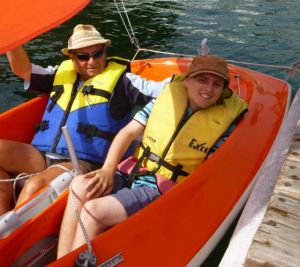 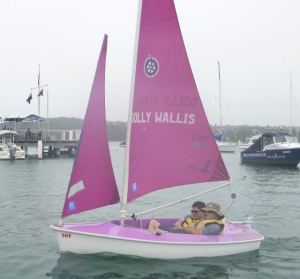 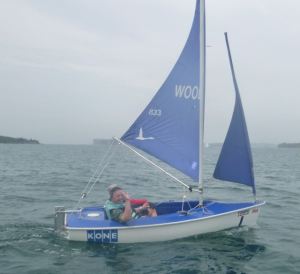