We do choose the most perfect days for sailing. This morning started off quite cloudy, but the breeze was a steady North Easterly, which was obviously going to blow the clouds away.Photo of Ryan and Brian in Black Swan

Our eager volunteer team consisting of Rob, Helen, Brian, Col and Rowell arrived early to put the boats and get them rigged while we waited for the rest of the team to trickle in. It did not take long before Philip, Ivan, Corey, Bob, John and Ivan came along to help finish off and get the boats down to the pontoon. Col made a terrific Pontoon Manager and by the time our team from Arranounbai were there, all boats were in the water, the briefing was done, and we were ready to Photo of Rodney, Peter and Rob in Charlie’s Chriotgo with Rob and Corey in Charlie’s Chariot, sailors Ivan, John, Bob, Peter and Col in the first wave were ready to take Riley, Wenbin, Sarah and Llamo for a sail, while we fitted Rachel into the car-seat and off they went for a brisk run across Manly Cove. In the meantime, young Zoe decided she needed to eat, so she hopped into Charlie’s Chariot, with teacher Stephanie for morning tea, and everyone was set. While all this was happening, an extra two sailors arrived, the two Davids, then Tony, John, Caroline, Barry and Lindsay, so that we had plenty of helpers for the pontoon and deck. Photo of Ginny and David in Eli DThe young students from Arranounbai had a lovely smooth sail, Wenbin on his teacher’s knee while the sun came out from behind the clouds. By the time Zoe had finished her morning tea, she was back at the pontoon and in a sailing boat, while the other children were being given something to eat, and our lovely group from Sunnyfields French’s Forest had arrived.

Vanessa, Rodney, Ben, Ginny, Jenny and Harry were brought down to the pontoon, once fitted with life-jackets. Vanessa and Rodney chose Charlie’s Chariot as their favoured mode of water-transport, Ben, Ginny, Harry and Jenny chose sailing.

It seemed only a few minutes before our eager team of Freshwater High students; Eddie, Ben, Emily, Amelia, Jordan, and Philip (from Killarney Hts) were there, and after a quick briefing were ready to don life-jackets and cross the water for a lesson in steering around a course, using the right words, which they were taught last week. Barry took over in Charlie’s Chariot, with helpers Photo of 3 boats being steered by Eddie, Emily and Amelia around the course at Manly Cove.Caroline and Tony, and photographer. This accidentally turned into a race, making it more fun for both kids and helpers. Amelia got quite wet, so came back to change, and the others followed slowly when the race was completed. Each student helped their own boat to be unrigged, washed and put away, and went back to school with the satisfied feeling of something unusual and interesting having been completed today. 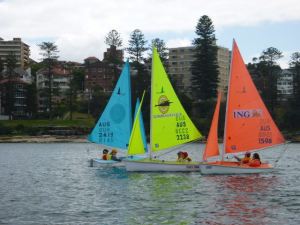 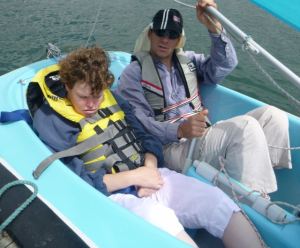 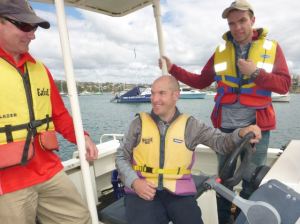 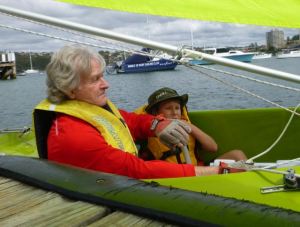