A group of pirates turned up at Manly Yacht Cub this morning to take some trainee pirates for a sail with their blunderbusses, cutlasses, swigs of rum, and their wenches for a treasure seeking adventure on Manly Cove.

There was a lot of AAAArghing and humphing, and plenty of grins as Royal Far West students Travis, Bryan, Lachlan, Noel and Jackson went for a sail in the brisk south-westerly. All came back with a huge smile and slightly damp clothes, as the water was quite choppy, and several waves broke over the gunnels of their craft.

Next to sail were our students from Verne Barnett school, dressed as close to pirates as we could possible imagine. What a lot of work these students and their parents put into their costumes and props!!!!! Jackson, Dash, Daniel, Will, Finley, 2 Anthonys, Naoto, Michael, a different Jackson, Harry and George alternated between a drive on the Support Boat and a sail, while some students actually did both. We are so proud of Naoto, who took hold of his courage with both hands, and went for a first time sail. Well done Naoto!!!!!

All of the sailors opted to stay in the more sheltered area for this session, as it was definitely much too blowy in the open water.

Our third group were from Pymble Sunshine. A sort of little miracle occurred when Alyssa decided that she would wear a life-jacket and go in a sailing boat for the first time, after trying to pluck up enough courage to do this for about 4 years. Those pirate costumes definitely had a positive effect on everyone today. The other sailors from Pymble were Georgia, Ellen, Brad, Arjun, Allen, Greg, Matthew and Charlie.

Photo of Helen, Brian with his hook, Rob and Kandy.The regular Manly Sailability Volunteers generally entered into the spirit of the day by dressing up and talking funny, so a great deal of thanks to sailors Samantha, John, Brian, Rob, Peter and Denis, Pontoon Manager; Samantha, Support Boat Drivers Rob, then Peter, observers Corey than Ray, registrar; Helen; help up on deck Rowell, and Kandy; on the pontoon Sue and then John C. Many many thanks to the carers and teachers who came down today to add to the atmosphere dressed as pirates and their buxom wenches. Also a big thanks to Barry who showed his face on the way home from hospital, and only went home when he felt too dizzy to stand up, and to Peter and Ray for fixing the horn on Charlie’s Chariot. 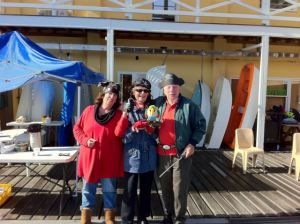 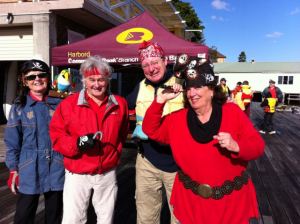 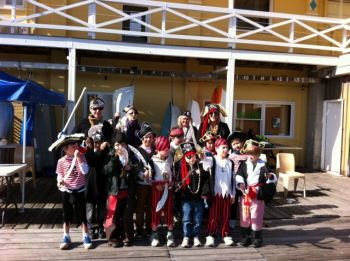