We were really into Summer today, with high temperatures and a very light northerly breeze. Our team arrived early to get everything ready for 17 kids from Camp Lionheart to go for a sail. Ralph went across to pick up our Support Boat, but this was not a possibility because of a flat battery. Instead, we borrowed a R.I B from the Manly Juniors with Barry as driver and Helen as observer. Ray was a fastidious Boat Operations Manager, with 6 boats quickly rigged and ready to take off when the kids arrived. Sailors: Jack, John, Ivan, Jackie, Evelyn, Jim were ready in the boats after taking some of our new volunteers for a practise sail, when Jasmin, Joseph, Declan, Riley,Photo of Jasmine who is dancing on the main deck. Cameron, Marny-Clare, Chithic, Darcy, Adam, Natalia, Blake, Doug, Aman, Aaryan, Jacob, arrived. They quickly arranged themselves into groups….who wants to sail first?……who wants morning tea first?….who wants more than one go?…… Sailing was ready to start. Kevin made a wonderful pontoon manager, with lots of help from Jerome, Mal and Tony. Up on deck, we had Jenny in the role of Registrar and radio operator, Ray was the time keeper, Ariane helped with traffic to and fro between the deck and the pontoon, Denis kept a watchful eye on the boat riggings, Niamh, Rowena, Marie, David G, Jannie, Nicola and Alice were taking photos, making the kids feel at home, with a little swapping around of sailors as the day became really hot, and it was good to have a break and change roles.

Photo of Chithic and Evelyn docking at the pontoon in Black Swan.

Jack, we weren’t going to let on that this was your first time in the boat with a person with a disability, but you looked as if you were having a great time, and because we could not unglue you from the boat, I am sure everything was satisfactory.Photo of Ivan and Riley in Vin also Jack in Dolly Wallis waiting for a customer at the pontoon.

Judy, it was so good to see you back, even if for just a few short hours while you are on your travels.

Some of these kids had been last year, and it was great to see them with so much courage, just setting off for a sail with all the confidence in the world.

Photo of Marni waiting in her chair on the pontoon.

Our wonderful lunch was made by some students from ICMS completing the volunteering component of their course. Thank you so much, Maya, Emmie, and the gang whose names I did not catch. You did a wonderful job and got some terrific photos for your C.V’s. The fantastic clean-up job you did at the end was just stupendous.

Last of all, a special thanks to the helpers from Camp Lionheart. You did an extraordinary job keeping all the children happy, full, hydrated and occupied on a warm busy morning, and getting them all up the ramp in time for lunch. 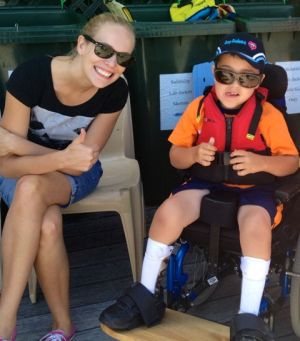 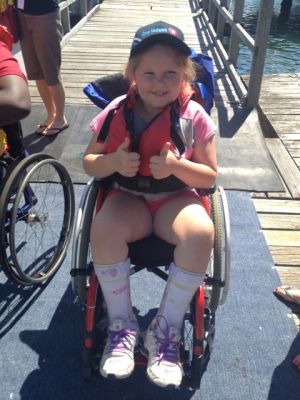 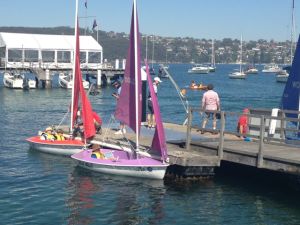 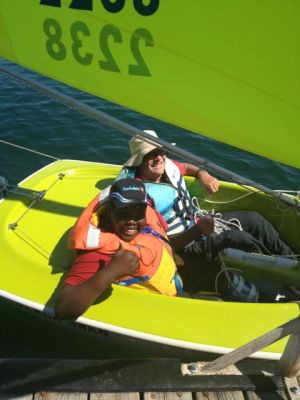 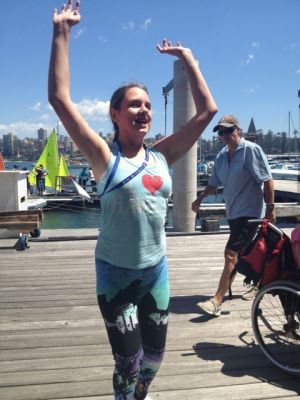