Sailability Manly joined the Sailability NSW team at Return 2 Sport, 2013 on Friday, 11th October, 2013. Denis and Eli were our representatives who went out to Olympic Park to help promote the Sailability activity to disability organisations who are looking for opportunities to get their participants out into the community.Photo of Dennis and possible new member.

It was a well organised morning, and we were able to get our message out to lots of interested parties. We expect that Sam will join us in the near future, and there were several other feelers put out.

Photo of the Paralympic Silver medallists with the Harlem Globetrotters.

We were lucky enough also to see a promotion for the Harlem Globetrotters, and watched 2 of them climb into wheel-chairs and enjoy the thrills and spills of a very fast game. Of course, the girls won, because they were headed by Leisl Tesch, our patron, and some of the Paralympic Silver medallists from 2012. 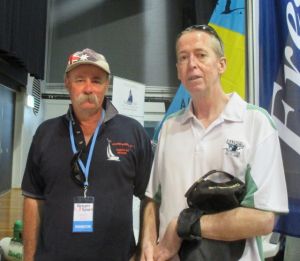