The first day of the Naval Review, marking the 100th Anniversary of the Australian Navy dawned without a cloud in the sky. Peter, Tom, a different Peter, Shelley and Rory Photo of our brave sightseers getting cold and wet on Thursday, 3.10.13had planned to take out Charlie’s Chariot into the middle of Sydney Harbour to watch the fleet of 16 Tall Ships enter the harbour. These ships are based all around the world, including some from Sydney, Hobart, New Zealand, Brisbane, Britain, etc.

The event was timed to commence at 11.00 a.m. and finish around 2.00 p.m. By the time Charlie’s Chariot was taken off the mooring, clouds had started to gather, and promptly at 11.00 a.m. the sky was covered over with mist and rain, and hail started to fall on all the spectators, whether on land or sea.

The ships were forced to enter the harbour on their engines, having taken the sail down before the heads, and were all inside by 12.00. They still made a Photo of one of the tall ships in the rainvery impressive sight, and all on board assured me that it was well worth the drenching and cold winds to get a close look at the ships as they entered. 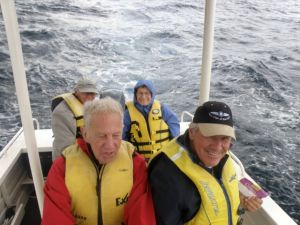 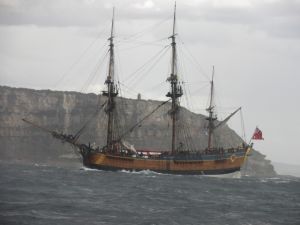