Just a short report this morning. The wind was just at that level where it is possible to sail with the sails furled, and the water has a slight swell to it. We decided to go ahead in a limited area, as the forecast was for the wind to ease, and we were expecting four groups.

Instead of easing, the wind became stronger, and the waves became larger, so we decided to call a halt before every one of our groups had sailed. Some stayed on and had a short run on Charlie’s Chariot,Photo of Elyce, Stephen and Paul on Charlie’s Chariot. but the bulk of our participants opted for a ferry ride, or a walk on the beach. Thanks so much to helpers: David W and David G., Corey, Karen, Peter, Caroline, Helen, Philip, Sheila, John Connor, John Baker, John Gray, Sue, Barry, Jim Young, Jim Gale, Brian, Ivan, Denis, Tony and Ibuku.

It turned out to be a worthwhile day, because we discussed a few items for our future, picked up the new Racing Rules Books, and had practice launching, Photo of David helping to pull out a keel.reefing and emptying and washing boats. 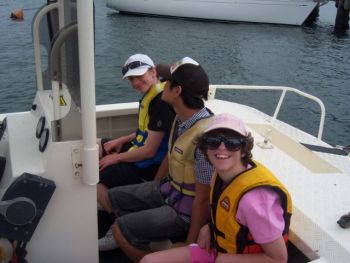 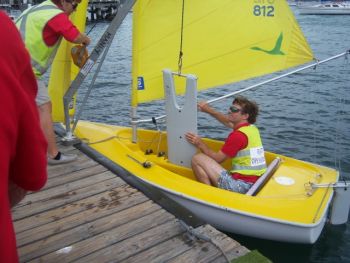